Jump was approached by Open Mike who were looking to revamp the title sequence for The Last Leg. The hugely popular show was coming back for a new series on Channel 4 along with a brand new studio set.

This was a really exciting opportunity for us at Jump, as we created the previous title sequence and relished the prospect of coming up with a new concept to push them even further.

“It was a fairly open brief at the beginning, as Open Mike didn’t want to hinder our creativity in any way. We had to keep in mind two of the show’s mantras, ‘Is it ok?’ and ‘Anything can happen!’. It was felt that the theme should be that of a live action journey to the studio. It also became clear that the explosion from the previous titles had become such an iconic moment, that building on it should be considered for the climax of the new titles.

We submitted 5 or 6 written treatments. The feedback was great and our clients said that they would be happy if we made any of them. The resounding favourite though was a concept we called ‘The Lost Leg’.

In an impossible world, anything can happen!
The boys become separated backstage, the world they are in is difficult to navigate, gravity and perspective make no sense. Thankfully, they all manage to find their way back to each other and into the studio. This is an environment where anything can happen. It is a reflection on the world we live in today, the unexpected routes that our politics, media and social trends take us. Thankfully, the boys at The Last Leg are here to make sense of it for us.

We wrote a number of scripts which set out scenarios for the boys to be lost within. We didn’t hold back and tried to concoct the most adventurous, interesting and character-revealing scenes as possible.”

“The sequence was going to be very complicated to build as we were playing with multiple-perspectives and with lots of visual tricks. We had to storyboard the sequence meticulously and build animatics using those drawings to get very accurate timings for each scene.

We knew we had a long, complicated shot-list and would only have the guys for one day. For that reason our shoot schedule was very thorough to minimise set-up times, and the number of occasions props had to be repositioned. We had a Prep Day in the studio before the main shoot. Every lighting set-up was blocked and measured, meaning that we just had to shift some lights, props and the camera on Day 2 when the guys were on set.” 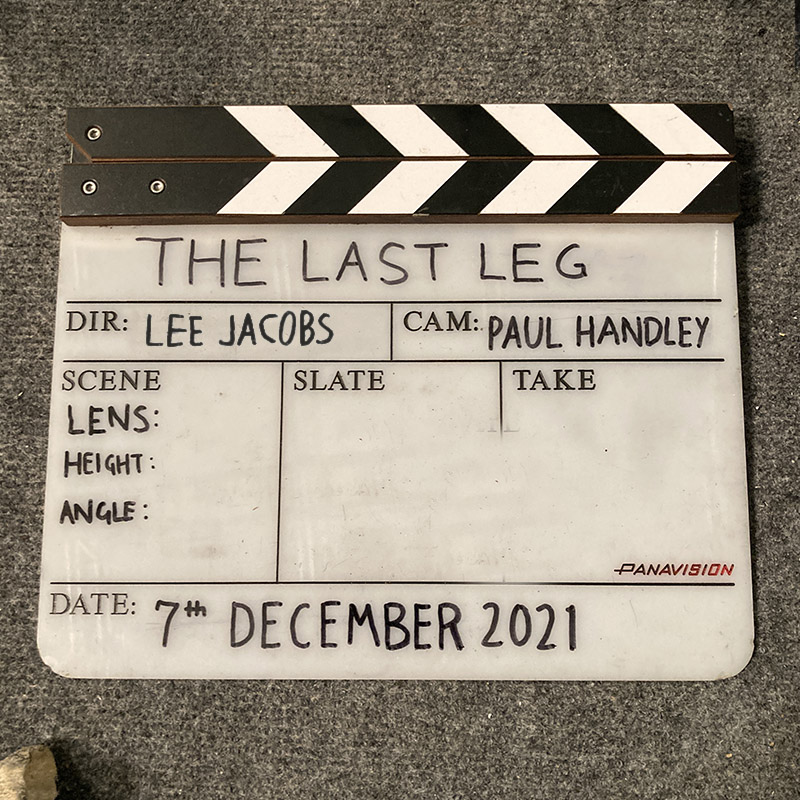 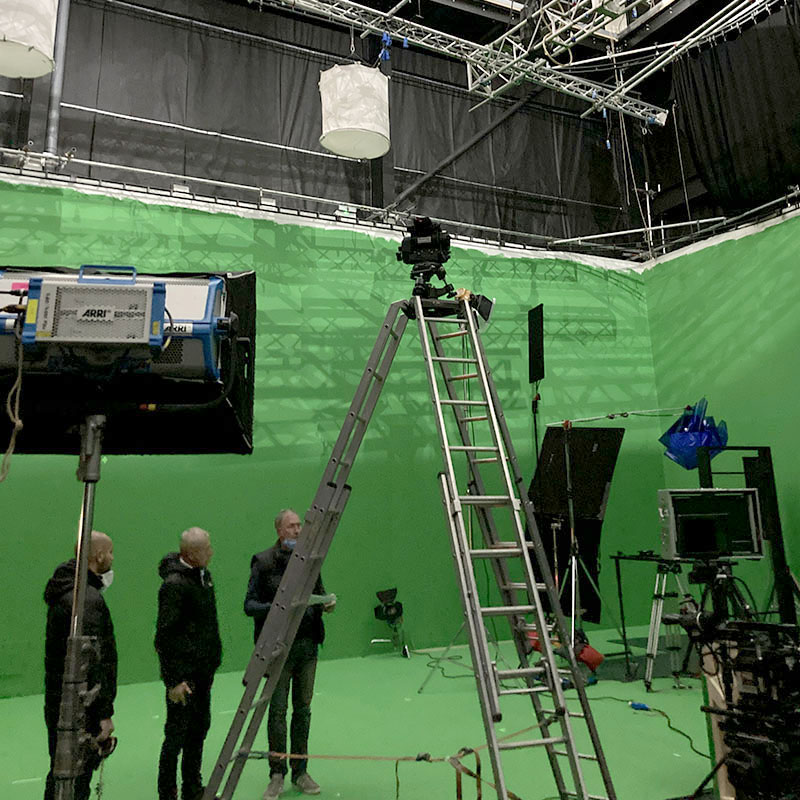 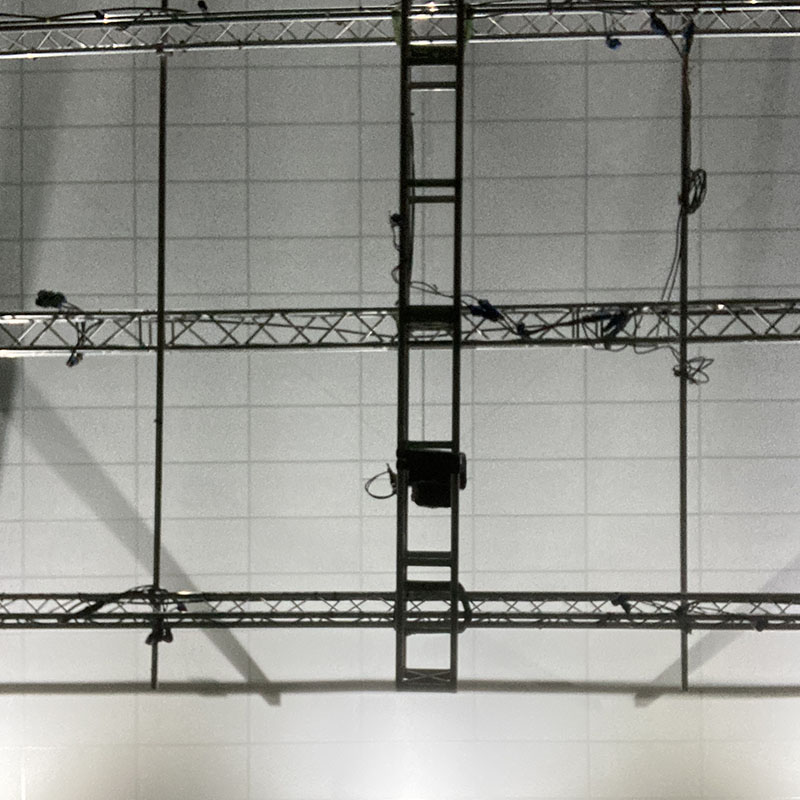 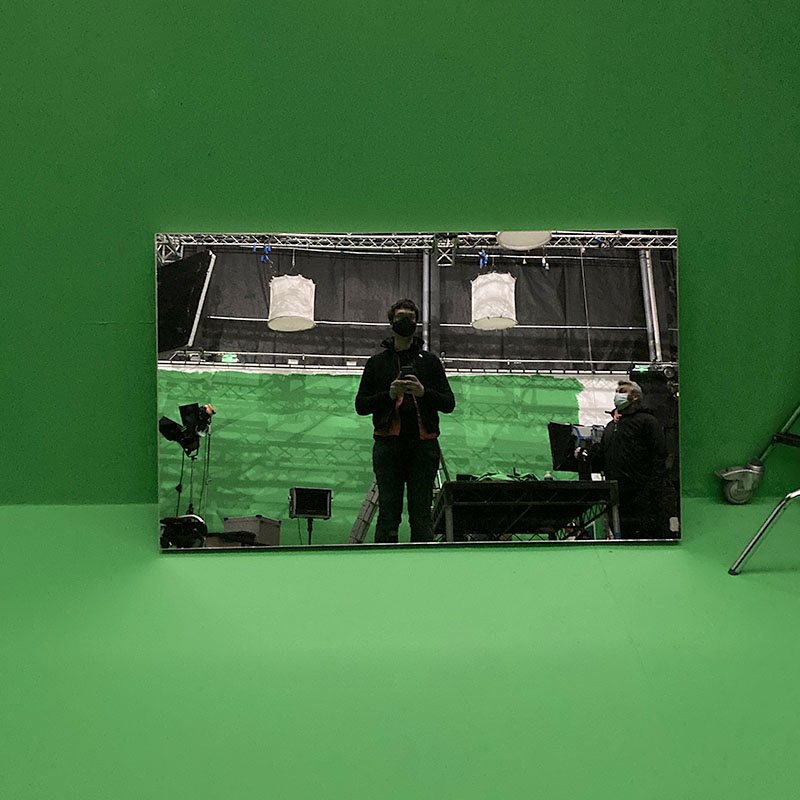 “Jump is a fully remote-working company. We have good systems in place now for sharing and rendering. We used low-res versions of all the rushes on Dropbox for everybody to look at and to speedily build the base of the sequence. Then finally, we used the full-size selected rushes to key, composite and finesse. Some of the footage was 8K! We have an external render farm which really helped speed up the 4K 3D renders and allowed us to fine-tune the 3D animation that the boys interact with.” 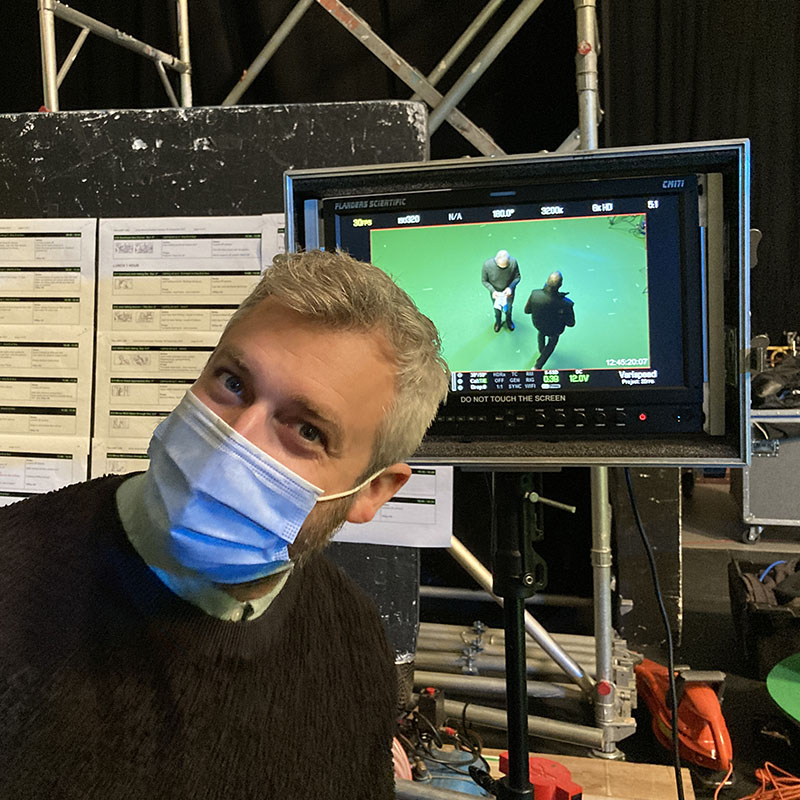 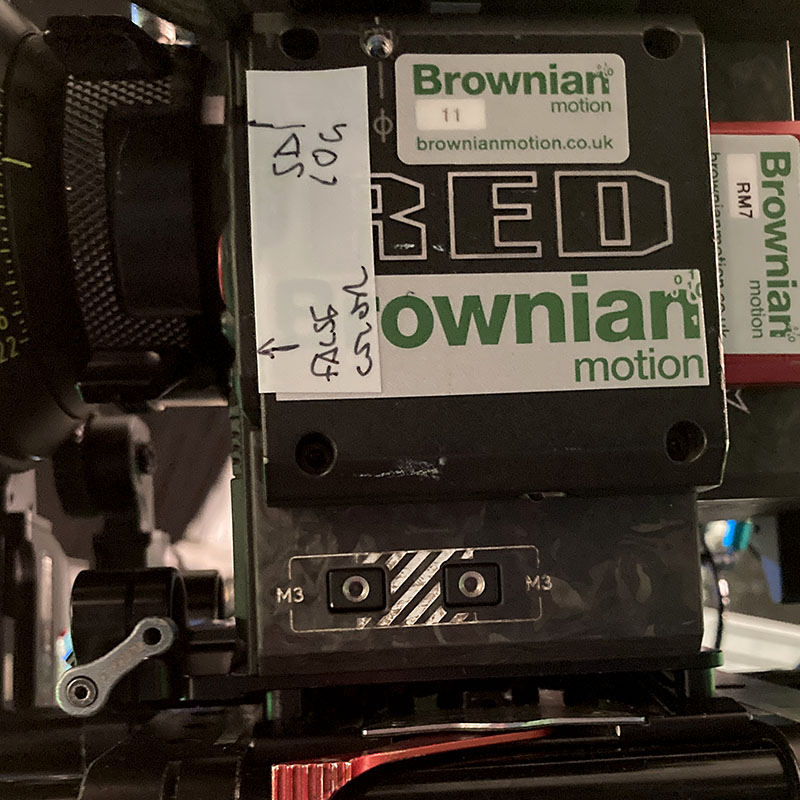 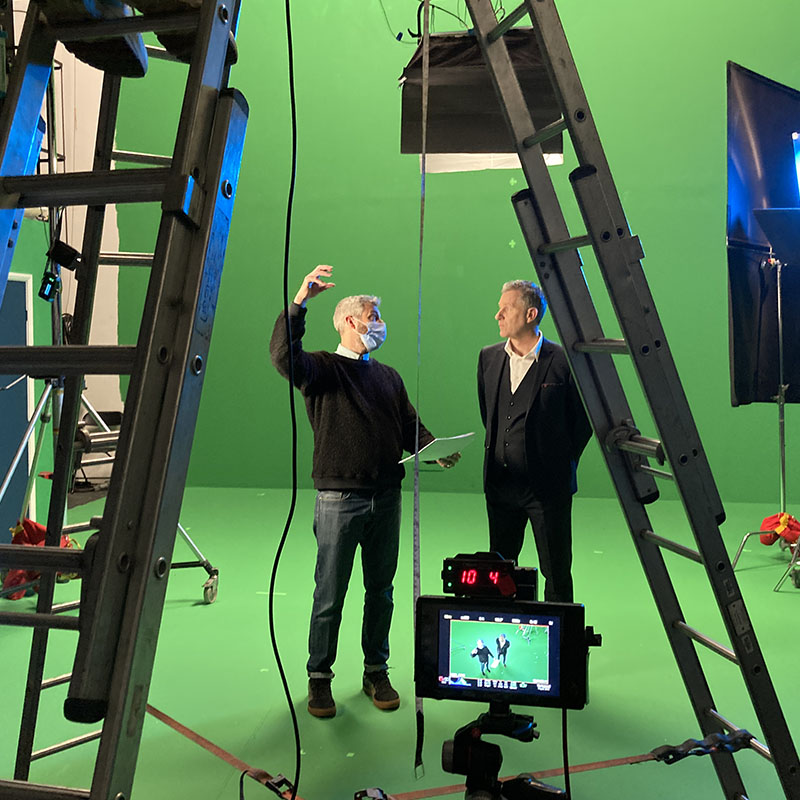 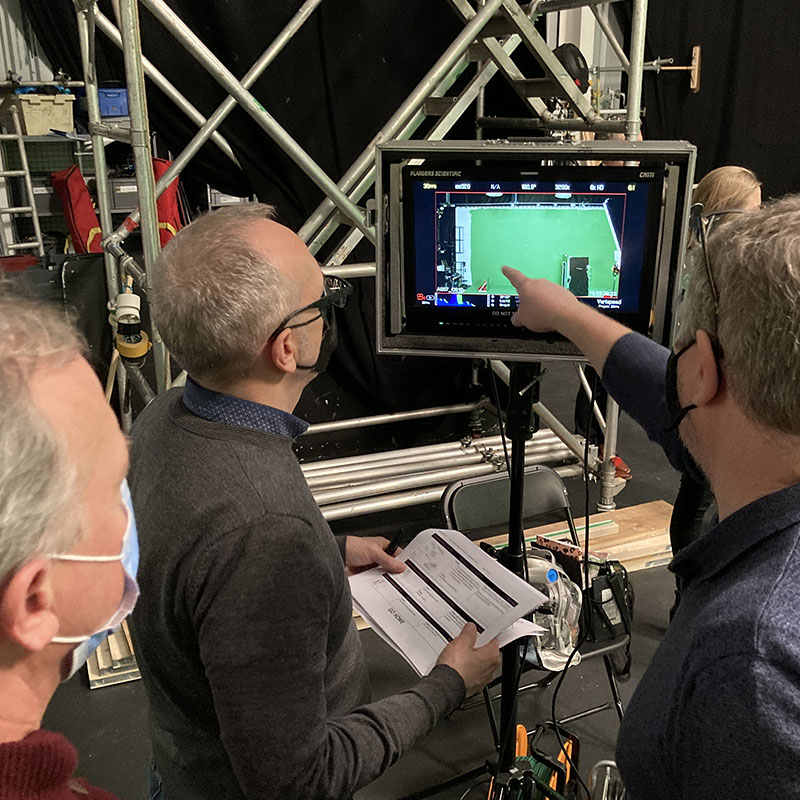 In this scene, as the men walk towards us, Josh falls down a hole and Alex is distracted looking at his phone and gets lifted away on a gangplank being hoisted.

LJ – “The dolly zoom was intended to help show Adam’s realisation that the boys had been separated. It was timed with the lyric “what goes on” and was a reference to many films, but we kept re-visiting the moment when Chief Martin Brody sees Jaws for the first time for inspiration.”

CO – “Russell Mann built a rough Escher scene in 3D, which we overlaid on the live filming of the boys so we got the angles right. We went on to make those Escher scenes much more complex, including ramps as well as stairs. The styling was inspired by a studio backstage area, so metal stairs, hazard tape, gantries and lots of lighting.”

LJ – “ This was inspired by Escher’s Relativity and the film Labyrinth (where Jennifer Connely is looking for little Toby). This space allowed us to put the boys in the same scene as each other, but out of reach and in jeopardy.

Smoke and atmosphere was added to help with the idea that the environment is dream-like and fantastical. In some instances, like this Escher scene, we made the atmosphere using a particle system allowing us to make Josh interact with a layer of smoke as he falls through it.”

In this scene we see the boys entering doors that are placed around a room at different perspectives. We also clearly see for the first time the colourful letters that are a part of the new set design. These were included to tie the looks together.

LJ – “We had the plans and sketches of the Letter models from the set designer which we turned into 3D models. Later, we saw pictures of workshop versions, and finally we saw the finished ones only a few days before finishing but we were pretty spot on.”

RM – “For this scene we had worked out where the camera was relative to each of the doorways. We knew how big the room we wanted to create was from tests made in 3D earlier. Then it was a case of measuring out and placing our doors / props at the correct position, and recording each piece of action one at a time without moving the camera. In this case the camera was positioned as if in the centre of the room. This way we were also able to shoot the upside-down doors and action the right way up. Very helpful! It also enabled us to spin the room later in post – an added bonus from this set up. There are 11 shots making up this scene.”

LJ – “This was by far the trickiest of the scenes to shoot. There was so much happening in the scene that we had to refine and refine so that the action could be taken in easily. The letter knock was a late development. It was felt that too much of the action was happening in the edges of the frame. It was Exec Producer Andrew Beint’s suggestion that the letter gets knocked by Josh, and that it should ultimately become the reason that the set explodes behind the boys in the final scene. Initially the explosion was storyboarded to be caused by Josh’s fall. It was a great suggestion by Andrew and added a clever new thread to the sequence.”

CO – “Originally, we made the room rotate in After Effects in 2D, however, to add more realistic interaction we decided to rotate and track the doors in 3D. This allowed us to move letters in 3D space and make the curtains slide naturally. You’ll notice the curtains on the left start to bend as the room tilts. It also added some nice parallax.”

LJ – “One of my favourite moments was when placing one of the Alex’s into the room of doors scene. He looks to his right and quickly moves back inside the door. To make the most of his improvised acting, we made a giant letter A slide towards him in the 3D world. It looks like he’s seen the object heading towards him, making him quickly close the door to avoid collision!”

In this scene, Adam approaches a reflection of himself in a mirror – only to find he can actually walk through it. When Alex comes running up from behind to try and catch up with him – he slams into the surface.

RM – “This was all filmed for real so it did involve some rotoscoping but we felt we needed to shoot a real reflection to make it work. We shot the sequence multiple times, with and without the mirror, and also with perspex. We used distortion and particle effects around the hand to create the light effects.”

LJ – “The boys were fully committed throughout the whole shoot day. Poor Alex almost broke his nose running into the perspex – which he did for real. You can see his reaction after hitting the glass in the TV screens in the following scene. He really did go for it!” 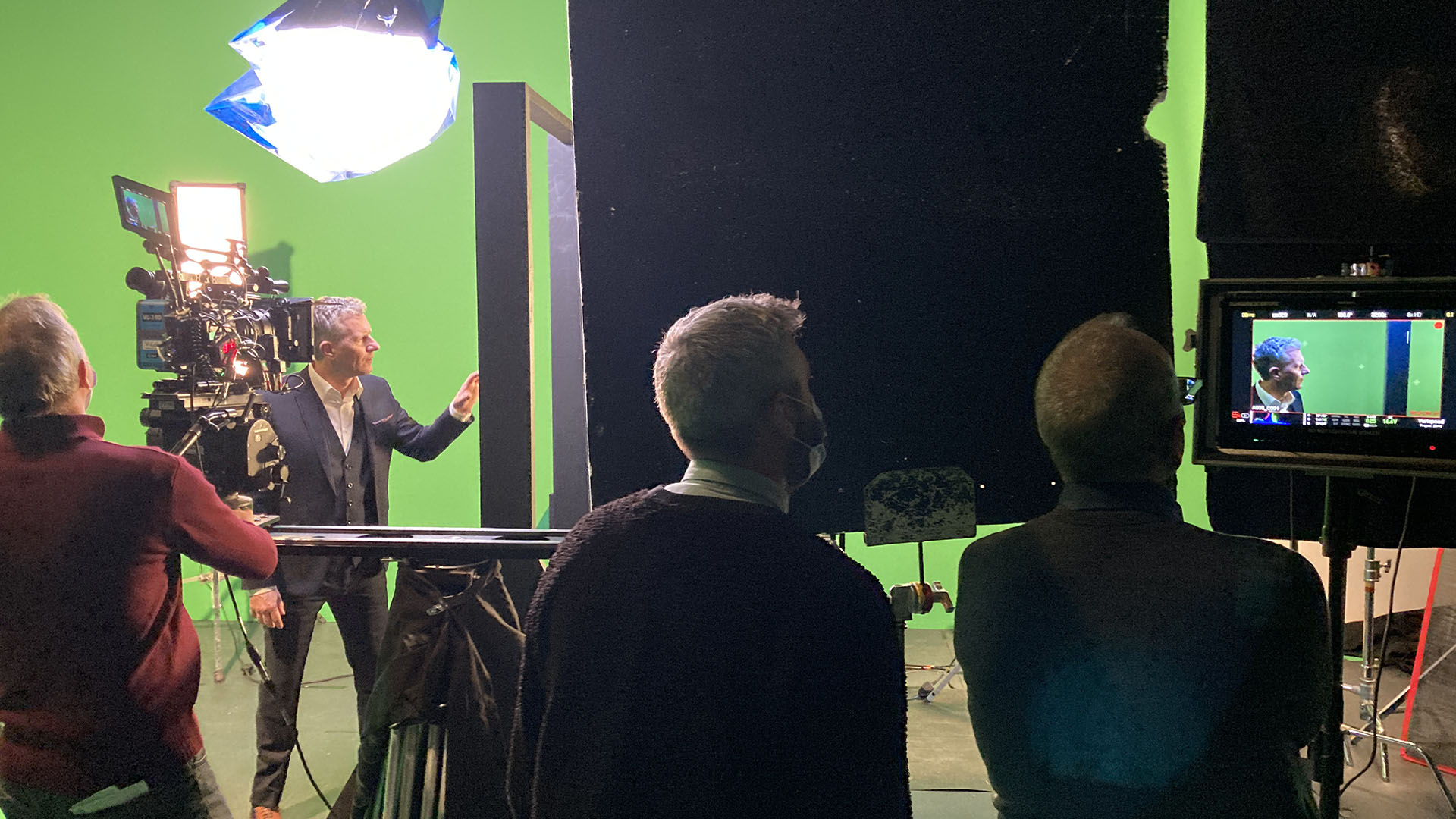 These shots are based on a wall of monitors in a studio gallery. Josh is seen still falling through space but now is relaxing and getting quite used to it.

LJ – “We had two leaf blowers and a gigantic turntable on the set for this one. Josh either sat or laid on a support so that he could flail about while having air blown at him and look like he was falling. We had the camera up high on long sticks and on a platform to get the right angle.

We filmed Josh holding a book and tracked in the cover titled ‘Is It OK?’. We also filmed some variations of Josh where he poured a cup of tea and dunked a biscuit – who knows, they may appear in a later series ha.” 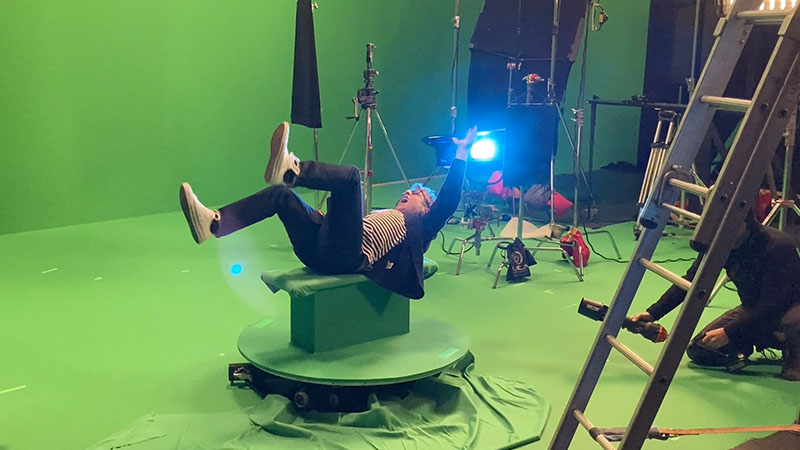 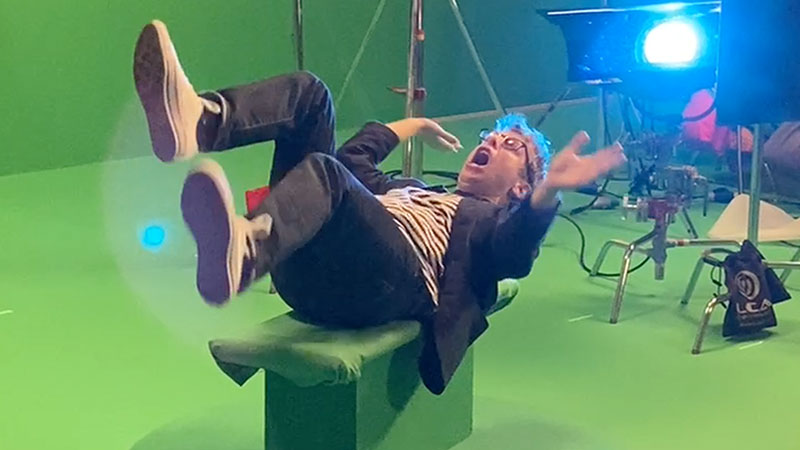 The chaps reunite but with dramatic consequences! The previous titles ended with an explosion behind the presenters walking towards us. It became an iconic part of the show’s brand.

LJ – “Once we decided that there was going to be an explosion in this new sequence, we knew it had to be bigger and better than the previous one. This is where our effects guru Russell Mann really came into his element. We now had the added storyline of a falling letter to trigger the explosion, so we came up with the idea that it should land on a box of Pyrotechnics, giving us a reason to explode stage flats, shelving and the flight cases to create an even more realistic blast.”

RM – “Getting all of the set to explode apart exactly as we wanted it to meant building it in a very specific way.

After a lot of experimenting we found the best places to put the breaks in the 3D models and dropped them in a certain way. We used some real world dynamics and some hand-animation for hero objects like the lid, and lots of layers of real footage and particles.”

LJ – “The Sound Effects were really important to help guide the eye to the action as there is so much going on, although the iconic Public Enemy music track had to be the hero. Because we had referenced lots of movies in the sequence, it seemed like the perfect opportunity to give a nod to one of the most recognizable sound effects in movie history, the Wilhelm Scream. It’s subtly mixed in as Josh falls through the frame. Originally it was used in the 1951 film Distant Drums, but it can be heard in more than 400 movies and TV series.”

“We had one incident of The Wrong Leg. I had to quickly courier one of Adam’s different prosthetic legs over to the studio because we forgot it was involved in a shot! Thankfully it all worked out fine though.”

LJ – “We would like to say a big thank you to Open Mike and Channel 4 for giving us the budget and creative freedom to give this sequence the love and attention it deserves. There were a lot of late nights but we were really passionate about making this one look amazing and loved putting them together.”

You can watch the original titles Jump designed for The Last Leg here.